This is the final post in a short series looking at implementing a small neural network to solve the XOR problem in Octave.

In the first post, we looked at how to set up the parameters of the network (the weights between the nodes), feed in an example and get the network to predict some output. The second post looked at implementing the back propagation algorithm, which adjusts those parameters in the network to improve the accuracy of it’s outputs.

Now it’s time to pull those pieces together so that we can let the network adjust the parameters to get as close to the right output as we desire.

Note that any parameter that has an “=” sign is optional and will get the default value shown if it is not provided explicitly.

The first step in our function is to check if we need to initialize the weights.

This is simply the same code as before, inside an “if” block.

Now we initialize the cost variable. This is done for every epoch:

In the previous post, we looked at updating the weights in the network after calculating the cost after the network has processed a single training example. This is a specific type of learning called “online learning”. There is another type of learning called “batch learning”, and this works by updating the weights once after all the training examples have been processed. Let’s implement that instead in our function.

Remember that THETA1 and THETA2 are matrices, so we need to initialize every element of the matrix, and make our delta matrices the same size. We’ll also use “m” to record the number of training examples that we present to the network in the epoch.

Now lets set up a loop to present those training examples to the network one by one:

This simply says repeat the following block for the same number of rows that exist in our XOR data set.

Now put in the code from Part 1 that processes an input:

Note the slight change in moving the bias node from the layer input calculation (Z3) to the output from the previous layer (A2). This just makes the code slightly simpler.

Then we add the code from Part 2, inside a test to see if we are in learning mode. The code has been slightly modified as we are implementing batch learning rather than online learning. In batch mode, we want to calculate the errors across all the examples:

If we’re not learning from this example, then we simply display the cost of this particular example.

That’s the end of the loop, so we close the block in Octave with:

Now we calculate the average cost across all the examples:

This gives us a useful guide to see if the cost is reducing each time we run the function (which it should!).

Now we’ll update the weights in the network, remembering to divide by the number of training examples as we are in batch mode:

And ending the function:

So that’s all that’s required to run all the training examples through the network. If you run the function a few times, you should see the cost of the network reducing as we expect it to: 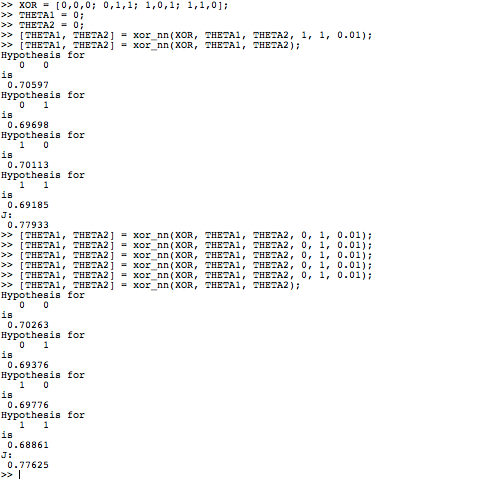 There’s not a lot here that’s new. The first call to the xor_nn function initialises the weights. The loop calls the function 100,000 times, printing out the cost every 1000 iterations. That may seem like a lot of function calls, but remember that the network weights are being adjusted by a small amount each time.

If you run that script, you should see something like this as the output: 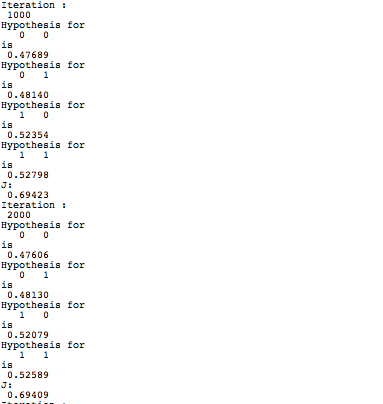 When the loop gets to the end, the output will be close to this (the exact numbers may be different): 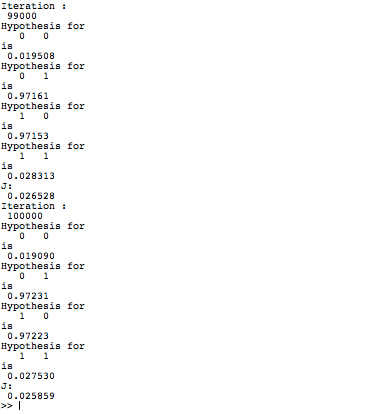 As you can see, the network guesses small numbers (close to 0) for the first and last XOR examples and high (close to 1) for the two middle examples. This is close to what we want the network to do, so we’ve successfully trained this particular network to recognise the XOR function.

If you wish to download the code directly, it’s available here on Github:

There are a lot of things that we should do to make sure that the algorithm is optimised, including checking that the default learning rate of 0.01 is actually the right rate. But that is a job for another day.

Now that you’ve seen a simple neural network recognizing patterns and learning from examples, you can implement your own in Octave for other more interesting problems.

7 thoughts on “A Simple Neural Network in Octave – Part 3”